Triops Cancriformis are being bred best in the summer

Cancriformis you can breed best in the summer!

Triops Cancriformis are easy to breed in the summer!

In our opinion, the Triops Cancriformis is ideally suited for the summer. When outside temperatures between 24 – 30 ° Celsius prevail, the room temperatures are usually around 25 ° Celsius. At night they may fall slightly but not usually to under 20 ° Celsius. This temperature range is ideal for the Triops Cancriformis and, thus, provides the perfect conditions. Many Triops beginners are dread the costs for a heating element which is why we recommend starting a Cancriformis-breeding in summer because during the warm months, you do not need a heater elements, thereby saving the cost of purchasing one, as well as the electricity costs. Tadpole Shrimp Cancriformis

Triops Cancriformis – what needs to be considered?

Inexperienced breeders of Triops Cancriformis, often place the breeding tanks of their Tadpole Shrimps on the window sill. You should not do that for two reasons: Firstly, the Triops nauplii should not be exposed to direct sunlight, as it is usually becomes too hot and might cause the nauplii to die. Secondly, for a good hatching rate, an external light source such as a lamp is usually required. Experience has shown that daylight alone usually does not result in a good hatching rate. Place the breeding tank for your Tadpole Shrimps in a bright place which is not exposed directly to sunrays.

Feed your Triops Cancriformis 1 – 2 days after they have hatched – ideally with our Triops young animal feed. It is best to give some powder into a glass and pour water over it. Then, stir it well with a spoon and tilt the contents into the breeding tank. Regarding the perfect feeding amount we cannot give a precise indication at this point as this depends primarily on the number of hatched Triops nauplii, as well as on the volume of your breeding tank.

Which water for Triops Cancriformis?

For water you can use brook, pond, and river or rain water. Even distilled or non-carbonated water is possible. We recommend water from a body of water in that is host to live animals, as this means there live microorganisms have already formed that may be vital for the survival of Triops nauplii. It is also possible to mix different types of water, for example, one half of creek water and the other half distilled water. Over time water evaporates and we recommend replenishing it with creek water.

In the first 1 – 2 weeks, it is not necessary to carry out a water change! Leave the breeding pools untouched and just feed your Tadpole Shrimps a little every day. If, after several days, there is still uneaten food or hides of your Tadpole Shrimps in the tank, they can be sucked off with a syringe.

Relocate Triops Cancriformis into an aquarium for Tadpole Shrimps

From a size of 2 – 3 cm, including the Tadpole Shrimp’s tail fork, you should relocate your Triops into a real aquarium. If there is a filter in that tank, it should have been previously run for at least two weeks. Otherwise, the nitrite content in water may possibly be too high. This could result in your Triops Cancriformis dying after a few hours in that water. We recommend preparing the aquarium for your Tadpole Shrimp about one week after the hatching of the Triops.

Triops Cancriformis’ differ visually from other Tadpole Shrimps due to their tabby shells. They are passionate about digging and dig up the sandy ground of your aquarium the whole day. At first, it may seem as though the Cancriformis do not swim but only dig but this will change with age. Once the Tadpole Shrimp get 2 – 3 weeks old, you may catch the cancriformis to swimming happily around the aquarium on their backs. Through the comparably lower temperature, Cancriformis grow slightly slower than, for example, the Triops Longicaudatus or Australiensis. In turn, however, there life expectancy is often slightly higher. Triops Cancriformis can sometimes reach an age of up to four months but the rule is about three months. They are also referred to as the European type of Tadpole Shrimp because they have their origin in Europe, or more accurately in Bavaria. Today, the Cancriformis also has some subspecies, such as the Beni Kabuto ebi albino or the Green Cancriformis from Spain. Both live under the same environmental conditions, but differ optically. The Beni Kabuto ebi albino is an albino form of the Cancriformis which means that he is transparent. But as Triops have red blood these albino forms are appearing red. The Green cancriformis shows off a green-tabby shell. 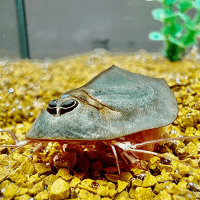 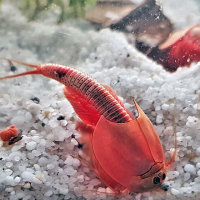 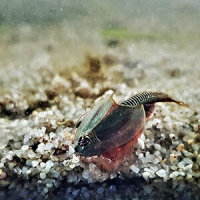 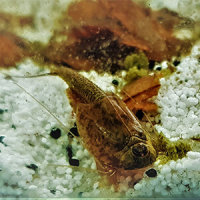 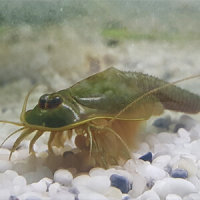 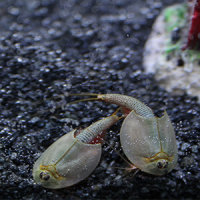 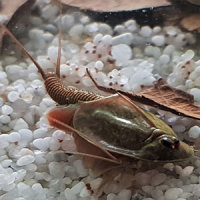 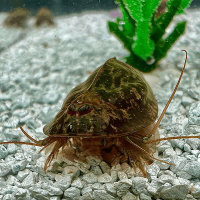 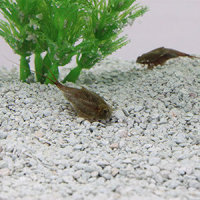 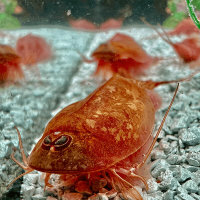 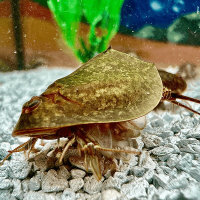 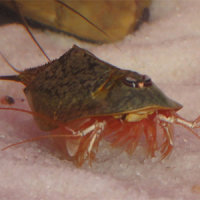 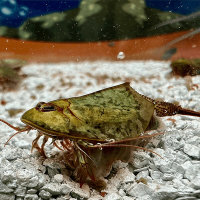 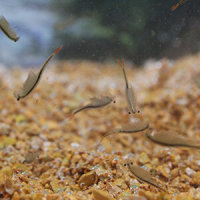 By selecting "Accept all", you give us permission to use the following services on our website: YouTube, Vimeo, Facebook Pixel, Google Tracking. You can change the settings at any time (fingerprint icon in the bottom left corner). For further details, please see Individual configuration and our Privacy notice.

The settings you specify here are stored in the "local storage" of your device. The settings will be remembered for the next time you visit our online shop. You can change these settings at any time (fingerprint icon in the bottom left corner).

To view Vimeo contents on this website, you need to consent to the transfer of data and storage of third-party cookies by Vimeo.. This allows us to improve your user experience and to make our website better and more interesting. Without your consent, no data will be transferred to Vimeo. However, you will also not be able to use the Vimdeo services on this website.

To send data to Facebook, you need to consent to the transfer of data and storage of third-party cookies by Facebook.. This allows us to improve your user experience and to make our website better and more interesting.

To send data to Google, you need to consent to the transfer of data and storage of third-party cookies by Google.. This allows us to improve your user experience and to make our website better and more interesting.

Would you like to see these contents? Activate the desired contents for one session only or allow the website to remember these settings. Once you have given your consent, the third-party data can be loaded. For this, third-party cookies might be stored on your device. You can change these settings at any time (fingerprint icon in the bottom left corner). For further details, please see the Privacy notice.